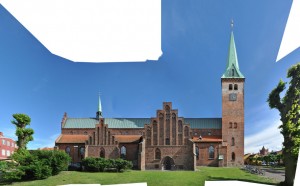 Wels, city foundation as the roman Ovilava in the 2nd century, situated centrally in Upper Austria on the shores of the river Traun, ca. 200 km west of Vienna and 100 km east of Salzburg, 2nd largest city of the Bundesland Oberösterreich (Upper Austria) and 8th largest city in Austria.

Wels is a Statuarstadt and seat of the county of Wels-Land in Upper Austria. As Ovilava it was an important city in roman times and became capital of the roman province of Noricum Ripensis. An important regional trade centre in the Middle Ages it was often visited by Emperor Maximilian I, who died at Wels Castle in 1519.

This is the north side of the Stadtplatz, the central square in Wels, from the Ledererturm in the west to the Stadtpfarrkirche in the East. The Stadtplatz originates from the 13th century and some buildings still date back to that time. The Ledererturm is the last remaining tower of the medieval walls of Wels and its design dates from the early 17th century. Its name refers to the medieval Lederer business (english: Tanning).

Visit our archive for more streetline panoramas from Austria.

We also photographed the south side of the Stadtplatz with the town hall, the Salome Alt House and the Kremsmünstererhof to be finnished later. Two more previews of the Medien Kultur Haus (former Sparkasse) and the Bahnhofstrasse can be seen below:

Amsterdam is the capital of the Netherlands, but not the seat of its parliament (Den Haag). It is known worldwide for its canal system, the so-called Grachtengordel, and its architecture (also an UNESCO world heritage site). In the 17th century, the Dutch Golden Age, it was probably the wealthiest city in the world. The offices of the East India Trading Company became the first stock exchange in the world in 1602. It was also for centuries a safe haven for europe’s jews and they called it the „Jerusalem of the West“. Anne Frank lived in Amsterdam. Today Amsterdam is home to several world renowned museums.

This night view of the Oudezijds Voorburgwal depicts the typical dutch gabled houses along Amsterdam’s canals. It lies within the De Wallen district of central Amsterdam and is also part of Amsterdams Red Light District (dutch Rosse Buurt), as can obviously be seen with some of the red windows and sex shops here. The Oudezijds Voorburgwal is one of the most frequented canals in Amsterdam and one can find more than a hundred national listed buildings along it, including De Oude Kerk, Amsterdam’s oldest church. This view of the iced canal is relatively rare and was taken in february 2012.

Visit our archive for more streetline panoramas from Amsterdam.

For classic view and further details visit the archive:

Lübeck has been the „Queen of the Hanse“ (leading city of the Hanseatic League) from the late 13th to the 15th century and during that time was also one of the biggest and most important german cities. The remaining parts of the medival old town, including the famous Holstentor, have been declared an UNESCO world heritage site in 1987. Also Lübeck is known for the literature of the brothers Thomas and Heinrich Mann, as well as the Buddenbrookhaus made famous in the novel „Buddenbrooks„.

This panorama by Lutz Riedel represents a stretch along the Untertrave, a section of the Trave river. Some important buildings here are the St. Marienkirche (St. Mary Church) in the back, the Marzipan Storehouses right of the centre and the Carl Tesdorpf building (an eyxclusive whine trader) left of the centre. we also see two streets going into the old town, the Alfstrasse next to the church and the Mengstrasse in the middle, which goes up to the Buddenbrookhaus. The large Marzipan Storehouses still remind of the important role the city played in the production and trade of Marzipan in the 19th and 20th century.

You can also find another street view of the Mengstrasse in our Lübeck archive.

For classic view and further details visit the archive: